Why is your baby arching back when lying down, held or sleeping? The short answer is that babies arch their backs for different reasons, from mundane to serious reasons. A baby arching his back could be just a natural response to mother nature, either to express his discomfort, fatigue, or other emotions, and it could be something serious like a delayed physical and mental development.

Keep reading to find out more exact causes and how to deal with them.

Should you worry when an infant arches his back when lying down or held?

Of course you would worry, as it is the reason why you are reading this article. But not every baby back-arching calls for alarm, and surely not all are to be taken with levity.

When your baby begins to arch his back when held or in sleep, you have no way of knowing the exact cause. But there are ways to pinpoint whether to simply change his sleeping posing or go see the doctor immediately.

Why do newborns and babies of 3 months or older arch their backs when held, sleeping or lying down?

As time goes on, babies as young a one month, 3 months or older will begin to arch their backs under different situations. As similar as each arch could be, they have their own peculiarities and each could mean something different, you should know exactly why your baby is arching his back.

Below are some common and  not serious reasons why babies arch their backs while sleeping at night;

You might ask yourself, “how can a baby be tired when he does absolutely nothing?” well, fatigue is a result of physical stress.

Therefore, the way you stretch after working on something for a while, or how you toss and turn in bed after a long day’s work, so can a baby arch his back in sleep to relieve sore muscles after a long day of breastfeeding, being carried around and playtime.

Most of the times, babies do have a problem with keeping down their food and spit it back up immediately after feeding, but when this happens almost every time and distresses the baby, it could cause babies to arch their backs in order to keep their food down.

There is, however, a serious type of acid reflux, GERD (Gastroesophageal Reflux Disease). Here, the back arching is accompanied with pain and discomfort when lying in a supine position. The GERD is caused by an underdeveloped lower sphincter in babies.

Therefore, until the lower sphincter develops as the baby grows, babies might continue to arch their backs in order to stretch out their oesophagus and keeps down their meals due to acid reflux. The GERD might sometimes require medications to reduce or relieve symptoms.

A lot of things could easily discomfort a baby, ranging from the outfit to the diaper or even the bedsheet. It might even be the room temperature. When babies are not comfortable when held or sleeping, they tend to wiggle all over the place and arch their backs. It is up to you as a parent to source out the reason for the discomfort.

As babies attain the age of four to six months, then they would not want to continue lying in one position, they are ready to start rolling over and changing positions thus practicing their amazing newfound abilities. So while trying to roll over on their tummies while sleeping, babies might arch their backs.

Kernicterus is a severe condition where new babies suffer from prolonged and serious jaundice. Jaundice is a common condition that often happens to infants where the baby’s skin and the whites of their eyes turn to a yellowish color.

In some rare cases, jaundice might develop into kernicterus from lack of treatment. When the kernicterus has reached a peak and has started damaging the baby’s brain, a severely arched back is one of the prominent features.

This is a condition that happens in infants due to a genetic abnormality in the voice box, thus making the child’s airways partially blocked. Not to worry, this is not as serious as it seems.

Babies born with this condition are able to eat and drink normally but normally experience noisy breathing. These babies tend to arch their backs in order to open up their airway or ease similar reflux issues. Although as they grow, the airway tends to clear up enough for these symptoms to disappear.

Sleep apnea is a disorder that is actually very scary for the baby and most especially the parent. This disorder completely blocks the airway and breathing is stopped for a complete ten seconds or more.

So babies with this order may forcibly arch their backs in sleep to keep their airways open. What distinguishes these back arching from others, however, are loud snores and startled awakenings.

Babies with this syndrome experience bouts of strained arching of their bodies which holds for a couple of minutes before they relax again. These looks very familiar to seizure but it is actually different because as opposed to the vigorous shaking that occurs in seizures, Sandifer makes the body freeze in its arched position.

A baby can also arch his back in pain as a reflex action, this can be due to nerve injuries. There are several causes of nerve injuries, it could be due the trauma faced during the birth process and pinched nerves, a fall or even mishandling while carrying the baby. To express their pains in this case, babies tend to arch their backs. It is time to source out the pain. 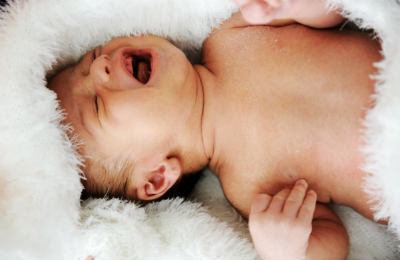 What to do when infants arch their backs and cry when held or lying down?

1. Calm the baby down

When you notice a baby arching his back in any position and crying, the first step to take the baby into your arms and into a quiet room with lots of lightning. This will help soothe the babies especially ones suffering from autistic spectrum disorders.

Babies are often comforted when warmly cuddled by their mothers in most situations. Therefore, when babies arch their backs and cry out in their sleep, it helps to place them close to your chest in a straight and comfortable position. This will help the baby calm down.

For babies that arch their backs due to irritation or restlessness, it helps to divert their attention with something else, either their favorite lullaby or something else.

Sometimes, babies arch their backs due to irritation caused by fabric or clothes tags, and sometimes the sheet on which they are lying. In this case, you should change their clothes into comfortable fabrics in accordance with the present season and temperature.

Sometimes, a baby arching his back might be due to a particular bed or surface, so it is up to you to notice if your baby arches his back only on one surface. In this case, you should change the mattress to a more comfortable one.

When should you go to see a doctor?

After going through the above-mentioned steps and you have done all you can, but the baby is still antsy, parental instincts will probably be the first thing to lead you to the doctor’s office.

If your baby arches his back due to autism, cerebral palsy or other serious condition that has been mentioned in the cause of this article, it is better to go see the doctor.

For babies diagnosed early, physical and behavioral have been proven to improve their lifestyle.

Other causes such as laryngomalacia or obstructive sleep apnea may not necessarily need the doctor’s attention as they might naturally resolve themselves after a few years as the baby grows. 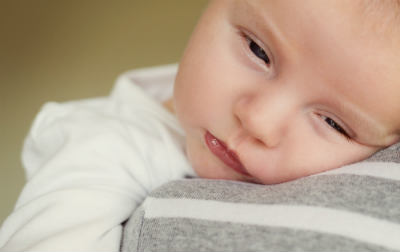 Baby arching back and autism

As it has been said in the article, sometimes, a baby with autism has the tendency of arching his back because people with autism naturally tend to shy away from body contact.

Baby arching back and teething

Baby might arch his back while teething because during this time, babies become naturally agitated and frustrated.

Baby arching back and developmental delay

When a baby arches his back, accompanied by cries of pain, it can sometimes be an indication of a serious medical condition that might be related to developmental delay such as cerebral palsy. 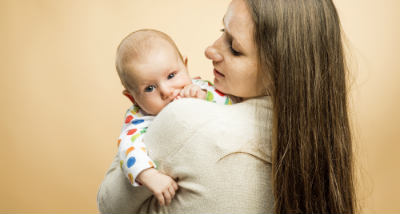 So, should you worry when your baby is arching back when held or sleeping?

As a parent, it feels good to know the reason for your child’s discomfort and how to ease it. Hopefully, with this article, your worry has been eased seeing the different causes of babies arching their backs while sleeping or when held and how to resolve these issues be it mere discomfort or something even complex.

Babies, as we all know, are one of the miracles in the world, therefore, keeping these bundles of joy happy and comfortable is also our joy as parents. And since they cannot communicate orally to explain their afflictions, the parent has to figure it out and see to it.